“At Premio Venezia I gave my best” 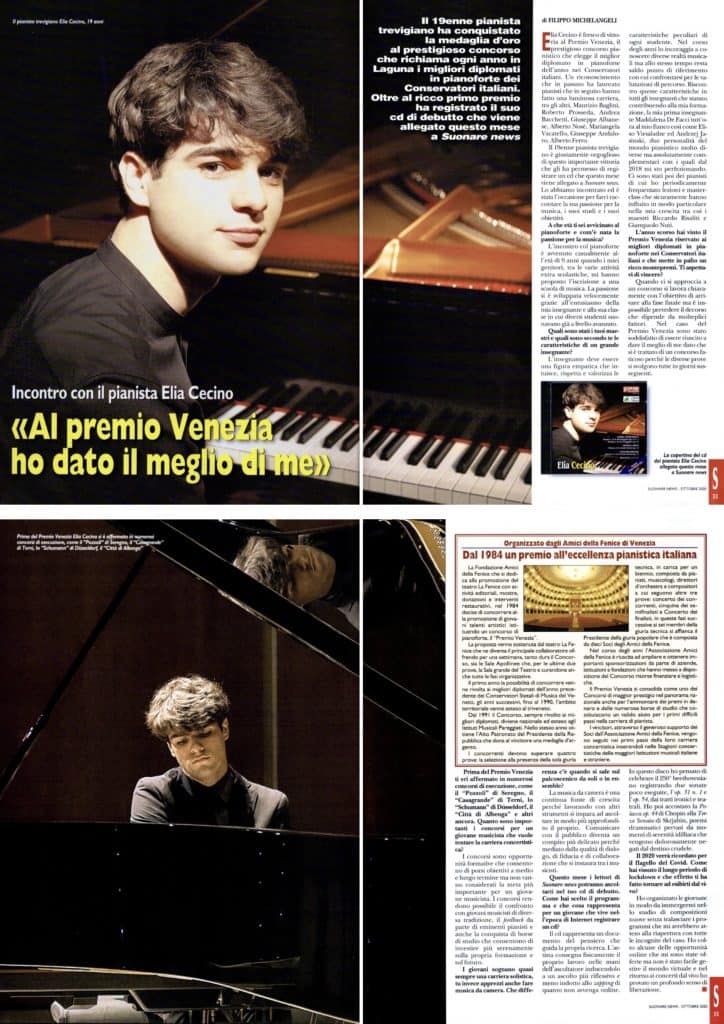 The 19 years old pianist from Treviso won the gold medal at the prestigious competition “Premio Venezia”. This competition attracts every year to the Lagoon of Venice the best-graduated piano students of Italian Conservatories. In addition to the rich prize, Elia Cecino has recorded his first CD which is included in this month’s issue of Suonare News.

Elia Cecino has just won the first prize at the Premio Venezia, the prestigious Piano competition which proclaims the best-graduated piano student of the year among the graduated students of Italian conservatories. This is a recognition which in the past has been given to pianists who have now a very brilliant career such as Maurizio Baglini, Roberto Prosseda, Andrea Bacchetti, Giuseppe Albanese, Alberto Nosè, Mariangela Vacatello, Giuseppe Andaloro, Alberto Ferro.

The 19 years old pianist from Treviso is rightfully proud of this important victory which has given him the possibility to record a CD which is included in this month’s issue of Suonare news. We have met him and this has been the possibility to let him tell us about his passion for music, his studies, and his future goals.

⌈ At what age have you started playing and how did this passion for music arise? ⌋

My first encounter with a piano as casual happened at the age of 9 when my parents, among the various extracurricular activities, asked me if I wanted to join a music school. The passion developed fast thanks to my teacher’s enthusiasm and also to her class in which several students already played at an advanced level.

⌈ Who have been your teachers and what are in your opinion the qualities, characteristics that a great teacher must have? ⌋

A teacher should be an empathetic figure who guesses, respects, and announces the peculiar characteristics of every student. In the years to come, the teacher has to encourage students to know different music realities but, at the same time, stays as a referring point with whom the students can have an open dialogue about the evaluation of their progress. I see these characteristics in all my teachers. My first teacher Maddalena De Facci is even now at my side as well as Eliso Virsaladze and Andrzej Jasinski, two very different personalities in the musical world but complimentary. With them, I have been studying since 2018. There have also been some other pianists with whom I had lessons and attended some masterclass which has certainly influenced my growth. Among those, I can name Riccardo Risaliti and Giampaolo Nuti.

⌈ Last year you have won the Premio Venezia targeted at the best-graduated piano students in Italian conservatories. This competition has a conspicuous prize. Did you expect to win? ⌋

When you are facing such a competition you certainly work with the final aim of reaching the final competition but it is impossible to foresee the result, which is influenced by many factors. In the case of the Premio Venezia, I am satisfied with the fact that I was able to give my best since it has been a hard and tiring selection due to the several performances you have to face one day after the other.

⌈ Before the Premio Venezia, you were positively judged in many competitions such as the Pozzoli in Seregno, the Casagrande in Terni, the Schumann in Düsseldorf, the Città di Albenga and many others. How important are competitions for a young musician who wants to become a professional concert performer? ⌋

Competitions are formative opportunities that enable the musician to create short and long-term goals but they have not to be considered the most important aim for a young musician. Competitions make it possible to have a constructive confrontation with other young performers from different traditions, to have the feedback from illustrious pianists and also the scholarships allow to make a serene investment in the formative advancement.

⌈ The young pianists dream always about a solo career, whereas you also appreciate performing chamber music. What is the difference between playing solo or in an ensemble? ⌋

Chamber music is a continually growing possibility because when you work with other instrument players you can learn to listen more in-depth to your instrument. To communicate with the audience becomes a task because it is mediated by the quality of dialogue, trust, and cooperation which is created among musicians.

⌈ This month the readers of Suonare News can listen to your music on your very first CD. How have you chosen the program and what does it represent for a young musician living in the age of the internet to record a CD? ⌋

The CD is a representation of the thought which directs one’s research. The artist gives up physically the work in the hands of the listener, inducing him/her to have thoughtful listening. This enables the listener to not perform a zapping listening as everybody does online.

In this CD I have thought of celebrating the 250th anniversary of Beethoven recording to among the less performed Sonatas (the Op. 31 n. 1 and the Op. 54). These Sonatas have ironic and theatrical tones. I have then connected the Polonaise Op. 44 by Chopin to the Third Sonata by Skrjabin, two dramatic poems which are pervaded from moments of idyllic serenity, painfully denied by a cruel fate.

⌈ 2020 will be remembered for the Covid-19 pandemic. How have you lived through the long lockdown period and what effect did you experience starting again to perform live? ⌋

I have organized my days to be immersed in the study of new compositions without leaving the programs that were attending to start once the concert season could open again. I have done this even though there were many uncertainties. I have accepted some online opportunities I was offered but it has not been easy to handle the virtual world and, with the return of live concerts, I have experienced strong relief.