Cecino, a disc to regenerate from solitude 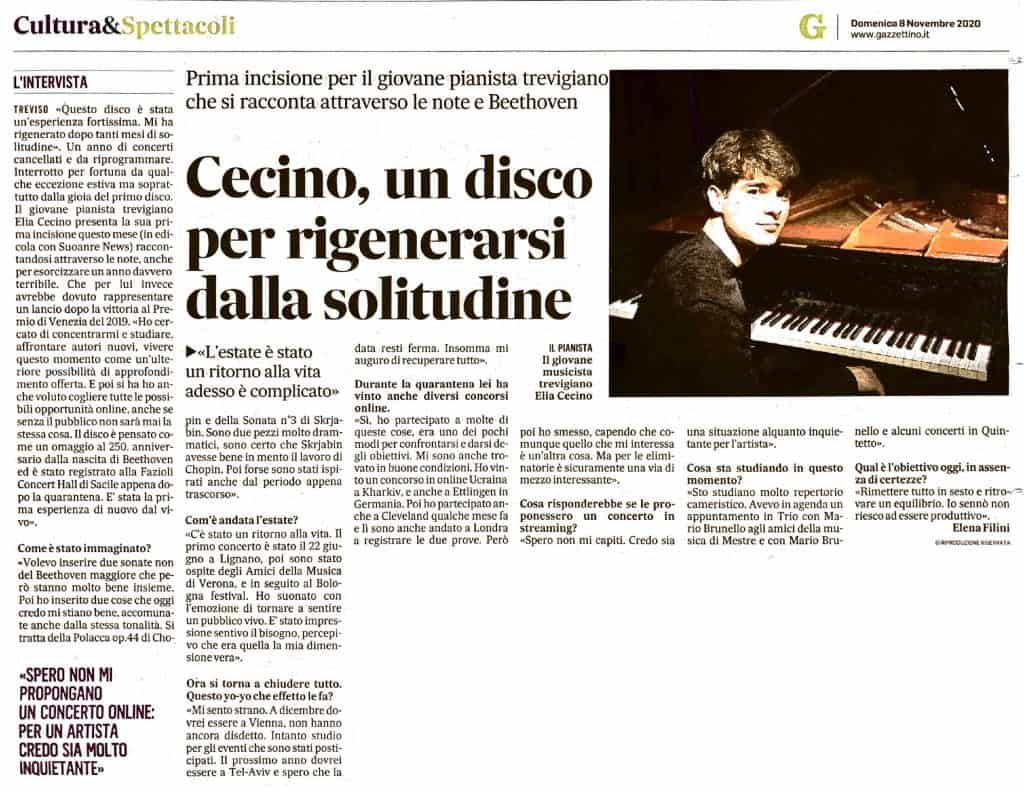 First CD recording for the young pianist from Treviso who tells himself through the notes of Beethoven.

«This record was a very strong experience. It regenerated me after so many months of solitude». A year of cancelled and rescheduled concerts. Luckily interrupted by some summer exceptions but above all by the joy of the first record. The young pianist from Treviso Elia Cecino presents his first recording this month (on newsstands with Suonare News) telling himself through the notes, even to exorcise a really terrible year. That for him instead should have represented a launch after the victory at the Premio Venezia in 2019.

«I have tried to concentrate and study, to face new authors, to live this moment as a further possibility of deepening oﬀer. And then I also wanted to take some opportunities online, even though without the audience it will never be the same. The album is thought as a tribute to 250th anniversary of Beethoven’s birth and was recorded at the Fazioli Concert Hall in Sacile just after the quarantine. It was the first live experience again».

⌈ How was it imagined? ⌋

«I wanted to insert two sonatas not the major Beethoven but they stay very well together. Then I inserted two things that today I think fit me well, also united by the same tonality. These are Chopin’s Polonaise Op. 44 and Skrjabin’s Sonata n. 3. They are both very dramatic pieces, I’m sure Skrjabin had Chopin’s work in mind. Then perhaps they were also inspired by the period just passed».

⌈ How was your summer? ⌋

«There was a return to life. The first concert was on June 22 in Lignano, then I was invited at the Amici della Musica in Verona, and then at the Bologna Festival. I played with the emotion of hearing a live audience again. It was impressive, I felt the need, I perceived that it was my true dimension».

⌈ Now it’s back to closing everything. This yo-yo who’s doing it? ⌋

«Yes, I participated in many of these things, it was one of the few ways to compare and set goals. I was in good shape. I won the online contest of Kharkiv, Ukraine, and also of Ettlingen in Germany. Then I also participated in the Cleveland Virtualoso Competition a few months ago and there I went to London to record the two rounds. Then I stopped, realizing that what interests me anyway is something else. But for the eliminatory is definitely an interesting middle way».

⌈ What would you say if they offered you a streaming concert? ⌋

«I hope this doesn’t happen to me. I think it’s a rather creepy situation for the artist».

⌈ What are you studying right now? ⌋

⌈ What is the goal today, in the absence of certainty? ⌋

«Put everything back together and find a balance. Otherwise I can not be productive».