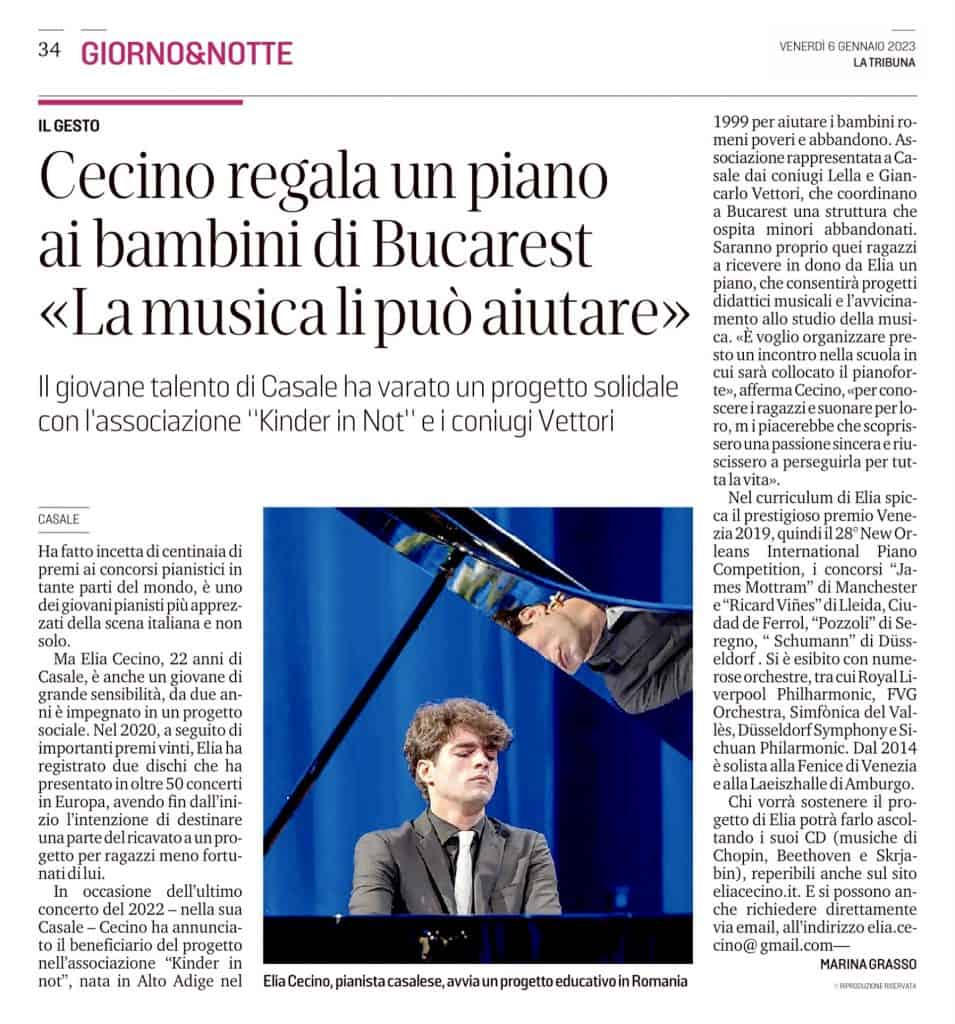 The gesture Cecino donates a piano to the children of Bucharest

«Music can help them»

Casale’s young talent has launched a solidarity project with the association “Kinder in Not” and the spouses Vettori.

He’s hoarded hundreds of prizes at piano competitions in many parts of the world, he is one of the most appreciated young pianists of the Italian scene and not only.

But Elia Cecino, 22 from Casale, is also a young man of great sensitivity, for two years is engaged in a social project. In 2020, following important awards he won, Elia recorded two CDs that he has presented in over 50 concerts in Europe, having from the beginning the intention to allocate a part of the proceeds to a project for children less fortunate than him.

On the occasion of the last concert of 2022 – in his Casale – Cecino announced the beneficiary of the project in the association “Kinder in not”, born in Alto Adige in 1999 to help poor and neglected Romanian children. The Association is represented in Casale by the spouses Lella and Giancarlo Vettori, who coordinate a structure in Bucharest that houses abandoned children.

It will be these young people who will receive a gift of a piano from Elia, which will allow musical educational projects and the approach to the study of music. «And I want to organize soon a meeting in the school where the piano will be placed», says Cecino, «to get to know the children and play for them, I would like them to discover a sincere passion and succeed in pursuing it for life».

In Elia’s curriculum stands out the prestigious Premio Venezia 2019, then on 28th New Orleans International Piano Competition, the “James Mottram” competitions in Manchester and “Ricard Viñes” in Lleida, Ciudad de Ferrol, “Pozzoli” in Seregno, “Schumann” in Düsseldorf. He has performed with numerous orchestras, including the Royal Liverpool Philharmonic, FVG Orchestra, Simfònica del Valles, Düsseldorf Symphony and Sichuan Philharmonic. Since 2014 he has been a soloist at the Fenice in Venice and at the Laeiszhalle in Hamburg.

Those who want to support Elia’s project can do so by listening to his CDs (music by Chopin, Beethoven and Skrjabin), also available on the site eliacecino.it. And you can also request them directly by email, at elia.cecino@gmail.com.