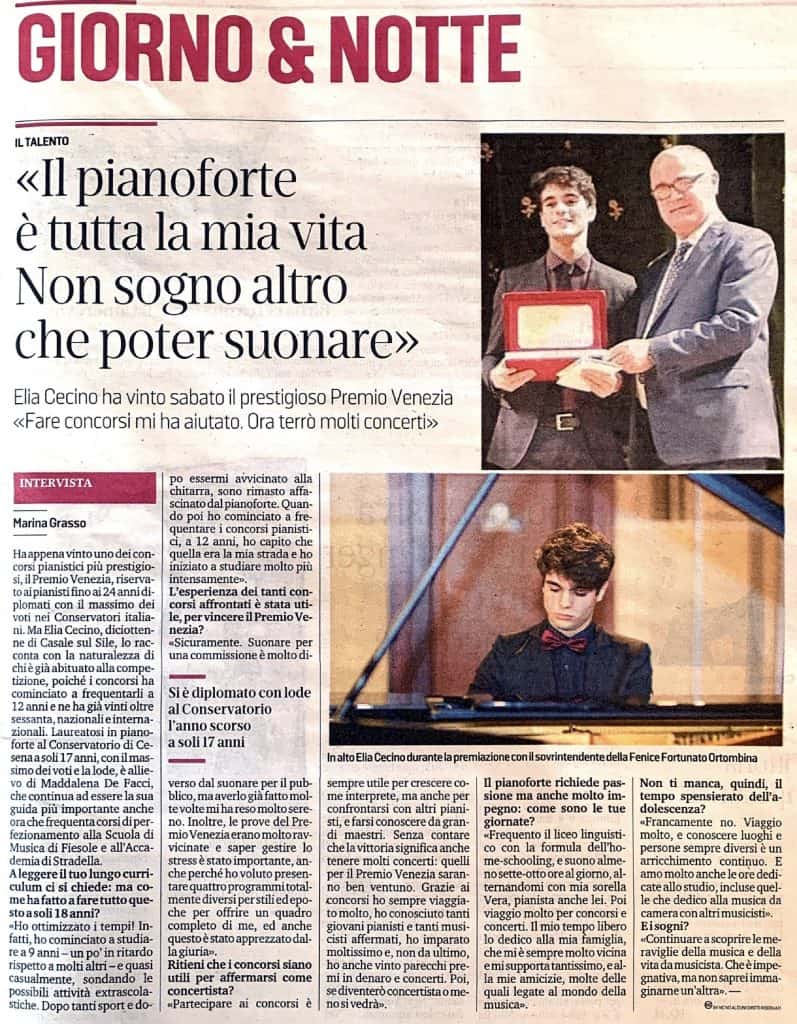 Cecino studies at the keyboard eight hours a day, he is winner in more than 50 competitions.

A life marked by rigour

Cecino has been travelling around Italy and the world for years playing the piano at competitions and concerts showing off his interpretative sensitivity that has been judged extra-ordinary. His life is marked by rigour and by his need to cultivate his talent to the best: eight hours of study at the piano every day travelling as well throughout Italy and Europe. He is attending the second year of Secondary School “Galilei” for Foreign Languages in Treviso as a private student through home schooling. He has also graduated at the Conservatory with a ten-year diploma in piano as a private student. In his CV he has a list of more than 50 absolute wins at national and international competitions, the first prize at the 9th Rosario Marciano International Piano Competition in Vienna and at the 8th Chopin International Piano Competition in Budapest. Last September he gained the first prize and other special prizes for the best interpretation of Bach and Mozart at the 4th Marbella International Music Competition in Spain.

His father is a craftsman, his mother is an architect and part of the Town Council. It all started almost by chance when he was nine: «Music was one of the many extra school activities I was offered» explains Cecino «I got involved in the world of music by chance and as a game. I was very lucky to be put in a piano class in which there were pupils at an advanced level so that I was exposed to good quality music from the very beginning.» His teacher from the irisMusica music school in Casale and Marcon, Maddalena De Facci, has been at his side since the very beginning and she was one of the first people to find out his talent.

What are your favourite composers? «Chopin is probably the author I have studied most in depth in the years. I also feel a particular affinity with the authors from the late Romanticism such as Scriabin and Rachmaninov and from the Twentieth century for example Bartók.»

«My daily life – he explains – means living classical music. Listening to it is always a new discovery and an unlimited search that gives me new points of reflection.»

At home the Cecinos have two pianos because even his sister shares the same passion and when passing by their house in an alley in the center, it is possible to get a moment of magic.