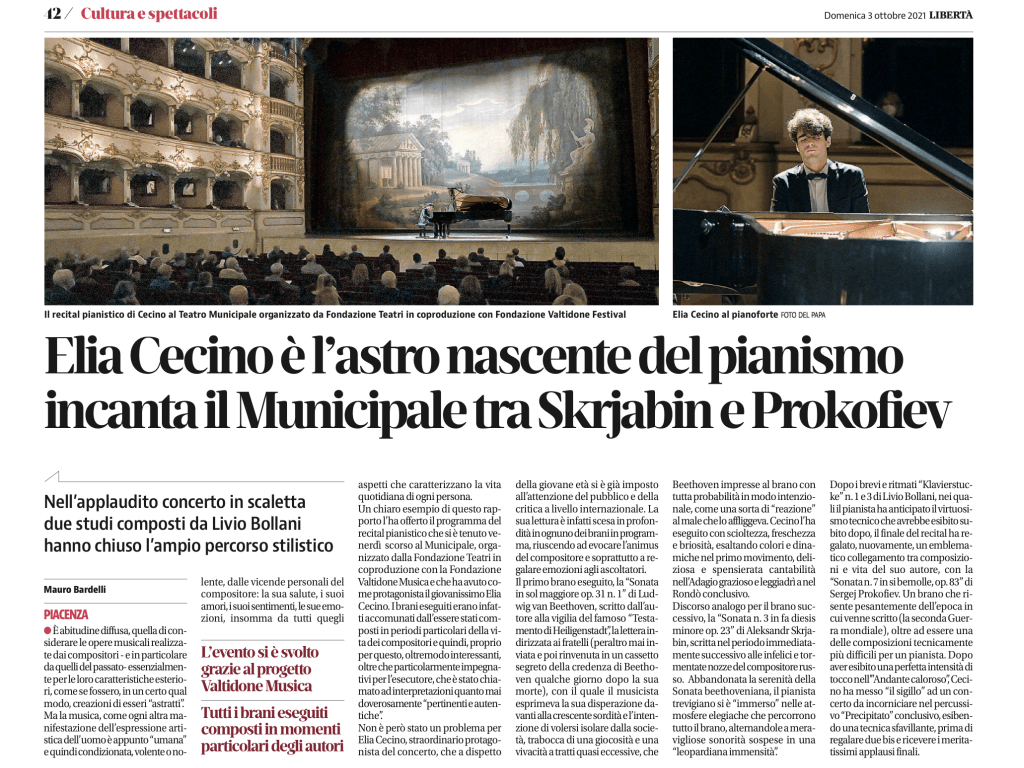 In the acclaimed concert two Etudes composed by Livio Bollani have closed the wide stylistic path.

It is common practice to consider the works made by composers – and in particular those of the past – essentially for their external characteristics, as if they were, in a certain way, creations of “abstract” beings. But music, like every other manifestation of the artistic expression of man, is precisely “human” and therefore conditioned, willingly or not, by the personal events of the composer: his health, his loves, his feelings, his emotions, in short, all those aspects that characterize the daily life of every person.

A clear example of this relationship was offered by the program of the piano recital that was held last Friday at the Municipal, organized by the Fondazione Teatri in co-production with the Fondazione Valtidone Musica and which had as its protagonist the young Elia Cecino. The pieces performed were in fact united by being composed in particular periods of the composers vote and therefore, for this reason, extremely interesting, as well as particularly challenging for the performer, which has been called to interpretations more than ever dutifully “relevant and authentic”.

However, it was not a problem for Elia Cecino, the extraordinary protagonist of the concert, who despite his young age has already imposed himself to the attention of the public and critics at an international level. His reading has in fact gone down in depth in each of the songs in the program, managing to evoke the composer’s animus and especially to give emotions to the listeners.

The first piece performed, the “Sonata in G major op. 31. n. 1” by Ludwig van Beethoven, written by the author on the eve of the famous “Heiligenstadt Testament”, the letter addressed to the brothers (never sent and then found in a secret drawer of Beethoven’s belief a few days after his death), with which the musician expressed his despair in the face of growing deafness and the intention of wanting to isolate himself from society, overflowing with a playfulness is a liveliness at times which excessive, in Beethoven impressed on the song in all probability intentionally, as a sort of “reaction” to the evil that afflicted him. Cecino performed it with fluency, freshness and vivacity, enhancing colors and dynamics in the first movement, delicious and carefree accounting in the Adagio grazioso and graceful in the final Rondo.

Analogous to the next piece, the “Sonata n. 3 in F sharp minor op. 23” by Aleksandr Skrjabin, written in the period immediately following the unhappy and tormented marriage of the Russian composer. Having abandoned the serenity of the Beethoven Sonata, the pianist from Treviso “immersed” himself in the elegiac atmospheres that run through the whole piece, alternating them with wonderful suspended sounds in a “leopardian immensity”.

After the short and rhythmic “Klavierstucke” n. 1 and 3 by Livio Bollani, in which the pianist anticipated the technical virtuosity that he would soon perform, the final of the recital gave, once again, an emblematic link between compositions and the life of his author, with the “Sonata n. 7 in B flat, op. 83” by Sergej Prokofiev. A piece that is heavily influenced by the work in which it was written (World War II), as well as being one of the most technically difficult compositions for a pianist. After having exhibited a perfect intensity of touch in the “Andante caloroso”, Cecino put “the seal” to a concept to be framed in the percussive “Precipitato” conclusive, showing a sparkling technique, before giving two encores and receiving the deserved final applause.