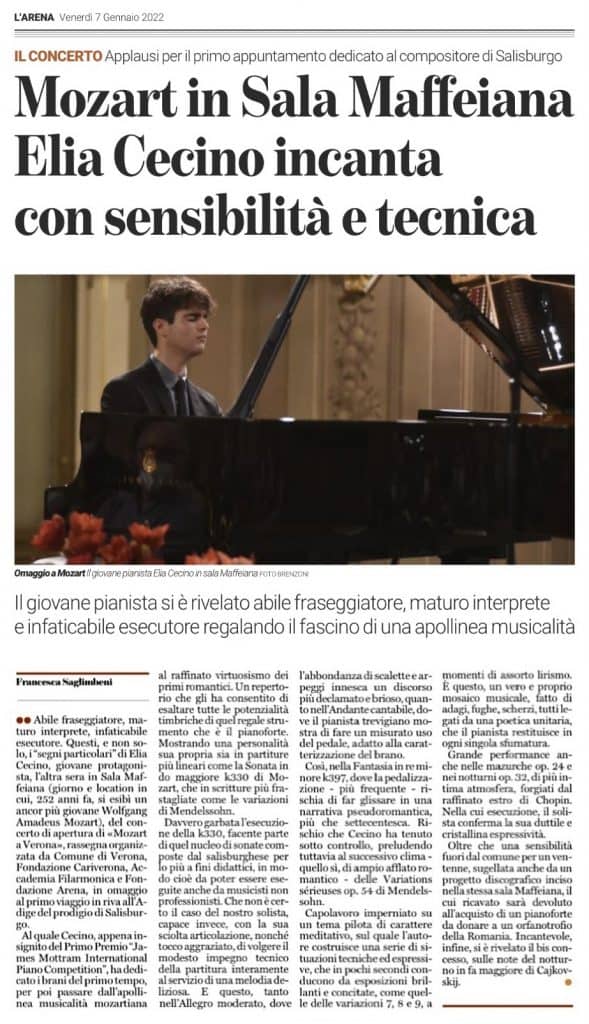 The young pianist proved to be a skilled phraser, mature interpreter and tireless performer giving the charm of a Apollonian musicality

Skilled phraser, mature interpreter, tireless performer. These, and not only, the “special signs” of Elia Cecino, young protagonist, last night in the Sala Maffeiana (day and location in which, 252 years ago, an even younger Wolfgang Amadeus Mozart performs), the opening concert of «Mozart in Verona», festival organized by the City of Verona, Fondazione Cariverona, Accademia Filarmonica and Fondazione Arena, in homage to the first trip to the Adige river of the prodigy of Salzburg.

To him Cecino, who has just been awarded the First Prize “James Mottram International Piano Competition”, has dedicated the pieces of the first half, and then move from the Apollonian musicality of Mozart to the refined virtuosity of the first romantics. A repertoire that allowed him to exalt all the timbral potential of that regal instrument that is the piano.

Showing his own personality both in more linear scores such as Mozart’s Sonata in C major k330, and in more jagged writings such as Mendelssohn’s variations.

The performance of the k330, part of that nucleus of sonatas composed by Mozart mostly for educational purposes, is really polite, so that it can be performed also by non-professional musicians. This is certainly not the case with our soloist, who, with his loose articulation and graceful touch, is able to turn the modest technical commitment of the score entirely to the service of a delicious melody. And this, both in the Allegro moderato, where the abundance of playlists and arpeggios triggers a more declamated and lively speech, and in the Andante cantabile, where the pianist from Treviso shows to make a measured use of the pedal, suitable for the characterization of the piece.

Thus, in Fantasia in D minor k397, where pedalization – more frequent – risks to gloss in a pseudo-romantic narrative, more than eighteenth century. The risk that Cecino kept under control, however preludening to the subsequent climate – that yes, of wide romantic inspiration – of the Variations sérieuses op. 54 by Mendelssohn.

A masterpiece based on a meditative pilot theme, on which the author builds a series of technical and expressive situations, which in a few seconds lead from brilliant and agitated exhibitions, such as those of variations 7, 8 and 9, to moments of absorbed lyricism.

This is a real musical mosaic, made up of adagios, fugues, scherzi, all linked by a poetic unity, that the pianist returns in every single nuance.

Great performance also in the mazurkas op. 24 and in the nocturnes op. 32, more intimate atmosphere, forged by the refined inspiration of Chopin. In his performance, the soloist confirms his supple and crystalline expressiveness.

In addition to an unusual sensibility for a twenty-year-old, also covered by a recording project recorded in the same Sala Maffeiana, whose proceeds will be donated to the purchase of a piano to be donated to an orphanage in Romania. Enchanting, finally, was the encore granted, on the notes of the nocturne in F major by Cajkovskij.