Power of the piano – Elia’s challenge 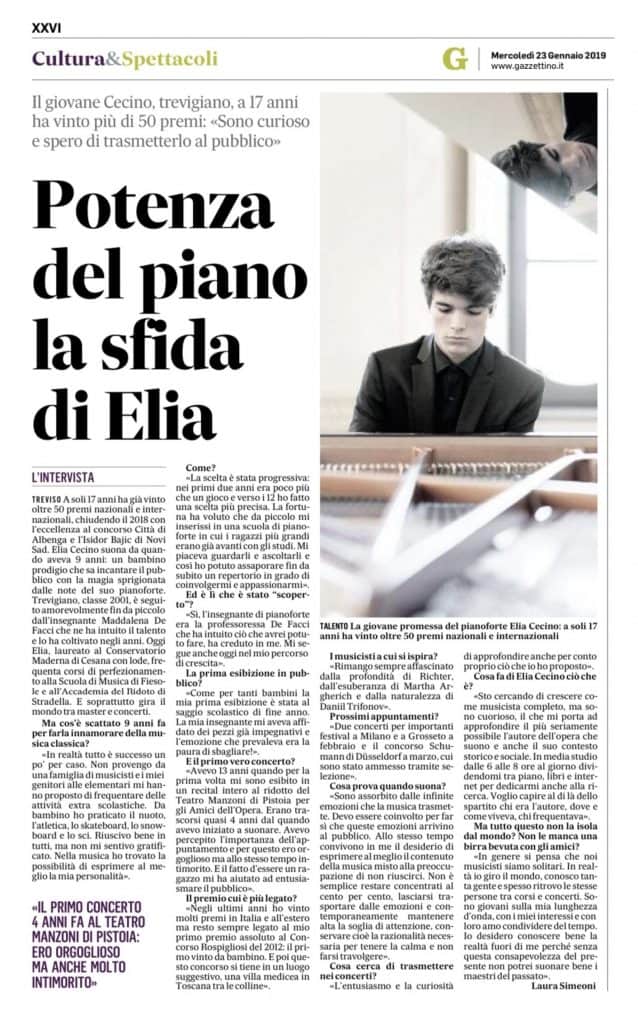 «I am curious and I hope to convey this to the audience».

At only 17 he has already won more than 50 national and international competitions concluding the year 2018 with his outstanding performance at the Città di Albenga Competition and the Isidor Bajic Competition in Novi Sad. Elia has been playing since he was 9: an enfant prodige who can enchant the audience with the magic released by the notes from his piano. Born in Treviso in 2001 he has been lovingly tutored by Maddalena De Facci who had sensed his talent and has brought it up in the years. Graduated Summa cum Laude at the B. Maderna Conservatory in Cesena, Elia Cecino is today attending specialization courses at the Scuola di Musica di Fiesole and at the Accademia del Ridotto in Stradella, but he is mostly travelling throughout the world for his concerts and masterclasses.

⌈ What snapped nine years ago to make you fall in love with classical music? ⌋

To tell the truth it all started almost by chance. There are no musicians in my family and when I was at Primary School my parents encouraged me in taking some extra school activities. As a child I practiced swimming, athletics, skateboarding, snowboarding and alpine skiing. I was good at them all however I didn’t feel rewarded. Music gave me the opportunity to better express my personality.

The choice was progressive: in the first two years it was a little more than a game but when I was twelve I took a more precise decision. I was very lucky to start in a school where older students were more advanced than me. I loved watching them and listening to them so that I was exposed to a repertoire that could involve and stimulate me from the very beginning.

⌈ And have you been scouted there? ⌋

Yes, it was my piano teacher, Maddalena De Facci, who had the right intuition and believed in me. Still today she follows me in my artistic growth.

As for most children, my first public performance was the school concert at the end of the year. My teacher had assigned me some demanding pieces and the prevailing feeling was to get something wrong.

⌈ What about the very first concert? ⌋

I was 13 when I first performed in a whole recital at the Manzoni Theatre in Pistoia for the Amici dell’Opera. Only four years had passed since I started playing. I was aware of the importance of this event and for this I was proud but at the same time scared: the fact of being a teenager helped me in involving the audience.

⌈ What is the award you are most affectionate to? ⌋

In the past few years I have won a lot of awards in Italy and abroad but I am always affectionate to the absolute first prize at the Rospigliosi Competition in 2012: the first won by a child. Besides, this competition takes place in a picturesque location, a Villa from the Medici on the hills of Tuscany.

⌈ Who are the musicians you are inspired by? ⌋

I have always been fascinated by the depth of Richter, the exuberance of Martha Argherich and by the spontaneity of Daniil Trifonov.

⌈ What are your next engagements? ⌋

Two concerts for important festivals, in Milan and in Grosseto in February and the Schumann Competition in Düsseldorf in March, where I have been admitted through a selection.

⌈ What do you feel when you play? ⌋

I am absorbed by the endless emotions that I get through music. I have to be involved in order to have the public itself moved and at the same time my wish to show the content of the music itself at its best coexists with the fear of not being able to make it. It is not easy to keep total concentration and to let yourself caught by emotions and at the same time to keep the level of attention high and to keep the rationality necessary to be calm and avoid being overwhelmed.

⌈ What do you usually try to pass on in your concerts? ⌋

The enthusiasm and the curiosity to deepen what I have proposed even in another moment, on your own.

⌈ What makes Elia Cecino what he is? ⌋

I am trying to grow as a complete musician, I am curious, which makes me study deeper and in a serious way about the author of the piece I am playing as well as about his historical and social background. I usually study between 6 to 8 hours a day ranging from the piano, books and the Internet all devoted to my research. I want to understand who the author behind the score is, who he really was, where and how he lived and who he saw and met.

⌈ Doesn’t all this isolate you from the world? Don’t you miss a beer drunk with your friends? ⌋

It is often thought that musicians are solitary people. To tell the truth I travel around the world, I meet a lot of new people and I often meet again the same people at courses and concerts. They are young people on the same wavelength, with my interests and I love spending time with them. I want to know very well the real world because without this awareness of the present I wouldn’t be able to play well the masters of the past.