Young Cecino can amaze you between Chopin and Beethoven 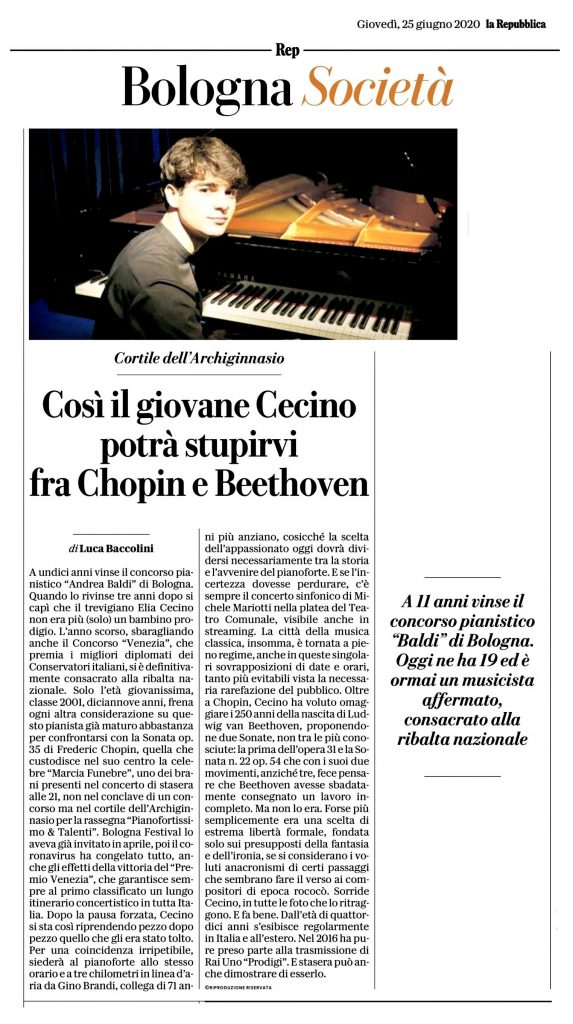 At the age of 11 he won the piano competition “Baldi” of Bologna. Today he is 19 and is now an established musician, consecrated to the national spotlight.

When he revisited it three years later it was understood that Elia Cecino from Treviso was no longer (only) a child prodigy. Last year, also defeating the “Premio Venezia” Competition, which rewards the best graduates of the Italian Conservatoires, has definitively consecrated itself to the national limelight.

Only the very young age, born in 2001, nineteen years, hinders any other consideration of this pianist already mature enough to deal with the Sonata op. 35 by Frederic Chopin, the one that houses in its center the famous “Funeral March”, one of the songs featured in the concert tonight at 21, not in the conclave of a competition but in the courtyard of the Archiginnasio for the festival “Pianofortissimo & Talenti”. Bologna Festival had already invited him in April, then the coronavirus frozen everything, also the effects of the victory of the “Venice Prize”, which always guarantees the first place a long concert itinerary throughout Italy.

After the forced break, Cecino is thus recovering piece by piece what had been taken from him. For a unique coincidence, he will sit on the piano at the same time and three kilometers as the crow flies from Gino Brandi, a 71-year-old colleague, so that the choice of the enthusiast today must necessarily be divided between the history and the future of the piano. And if the uncertainty continues, there is always the symphonic concert of Michele Mariotti in the audience of the Teatro Comunale, also visible in streaming. The city of classical music, in short, has returned to full swing, even in these singular overlaps of dates and times, all the more avoidable given the necessary rarefaction of the audience.

Besides Chopin, Cecino wanted to pay homage to the 250 years of the birth of Ludwig van Beethoven, proposing two Sonatas, not among the best known: the first of op. 31 and Sonata no. 22 op. 54 that with his two movements, instead of three, made one think that Beethoven had delivered an incomplete work. But it was not. Perhaps more simply it was a choice of extreme formal freedom, based only on the presuppositions of fantasy and irony, if we consider the anachronistic volutes of certain passages that seem to make the verse to the composers of the rococo era.

Cecino smiles, in all the photos that portray him. And he does well. Since the age of fourteen he performs regularly in Italy and abroad. In 2016 he also took part in the TV show “Prodigi” broadcast on Rai Uno. And tonight he can also prove to be.

By using the site, you accept our use of cookies. more information