The jury chose Cecino, self-confident and master of his own 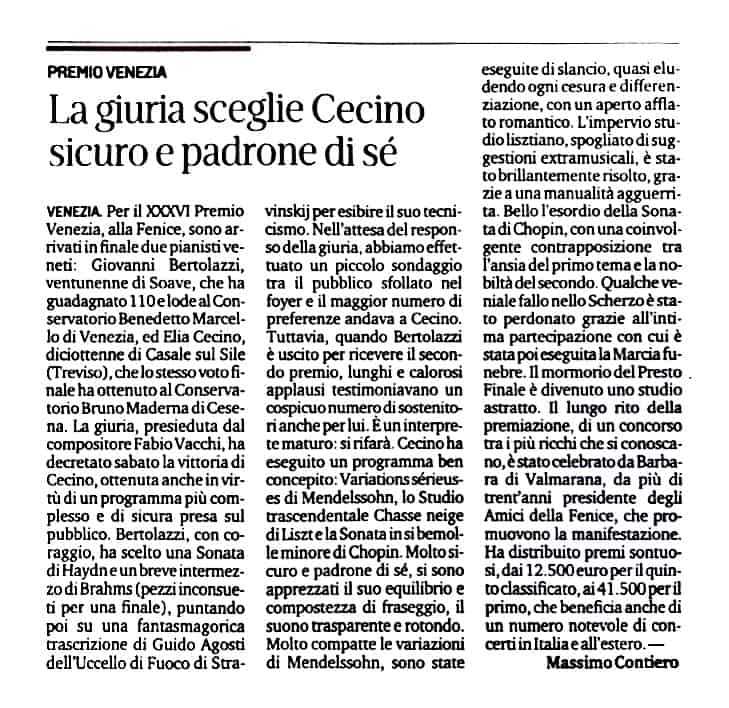 The jury chose Cecino, self-confident and master of his own

While waiting for the final results from the jury we carried out a survey among the public in the foyer and most people preferred Cecino. However, when Bertolazzi walked on the stage to get his second prize, long and warm applause showed that he had a remarkable number of supporters as well. He is a mature interpreter and he will surely make it.

Cecino performed a well-conceived programme: Variations Sérieuses by Mendelssohn, the Transcendental Étude Chasse Neige by Liszt and the Sonata in B flat minor by Chopin. He was appreciated for his self-confidence and his self-control, his balance and the neatness of his phrasing, the clear and round sound. The compact variations by Mendelssohn were performed with impulse eluding any caesura and differentiation with wide romantic inspiration. The full of difficulties Étude by Liszt, once stripped of any extramusical suggestion, has been successful thanks to his well-trained manual skills. Well appreciated the opening of the Sonata by Chopin with an involving contrast between the anxiety of the first theme and the nobility of the second. Some venial slips in the Scherzo have been forgiven for the intimate interpretation of the Marcia Funèbre. The murmuring of the Presto Finale has become an abstract study.

The long prize giving ceremony, of one of the richest musical contests known, was presented by Barbara of Valmarana, chair of Amici della Fenice that has been promoting this contest for more than 30 years. Rich prizes have been given, ranging from Euro 12,500 for the Fifth prize to Euro 41,500 for the first who will also benefit a cospicuous number of concerts in Italy and abroad.