The magician of the piano – a new enchantment 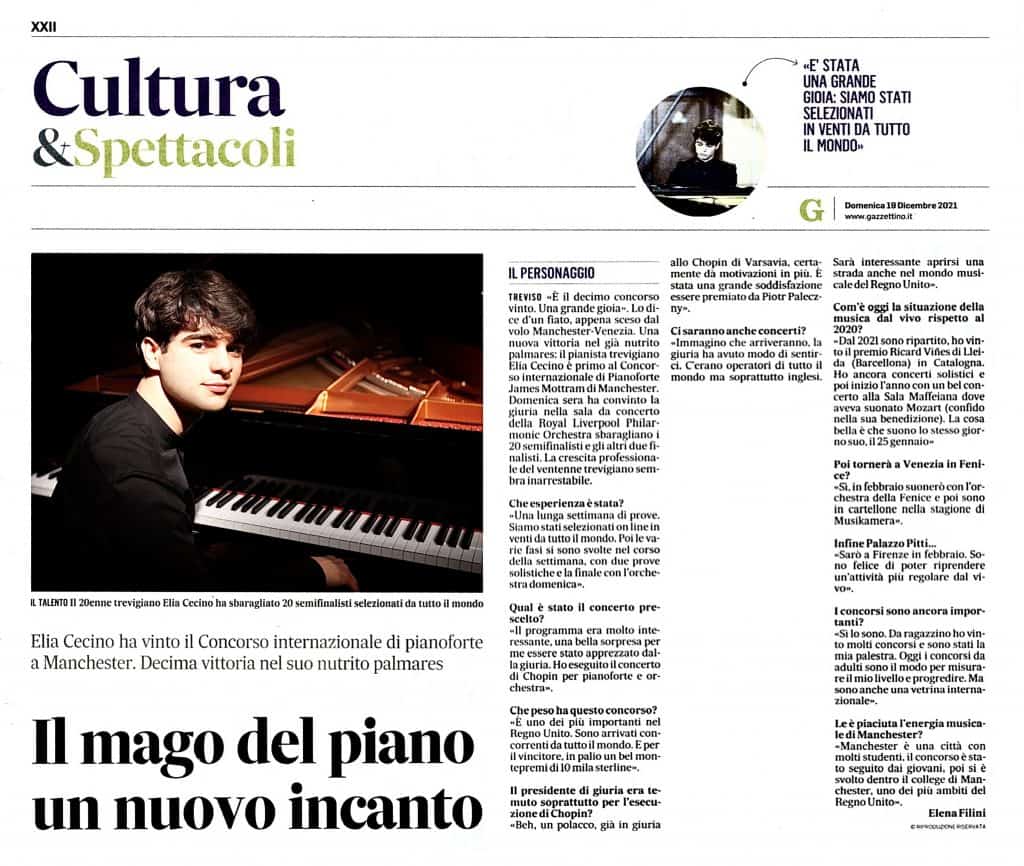 «It’s the tenth competition won. A great joy». He says it in one breath, just off the Manchester-Venice flight. A new victory in the already nourished palmares: the Treviso pianist Elia Cecino is first at the James Mottram International Piano Competition. Sunday night convinced the jury by playing with the Royal Liverpool Philharmonic Orchestra and defeating the 20 semifinalists and the other two finalists. The professional growth of the twenty-year-old Treviso seems unstoppable.

⌈ What experience was that? ⌋

«A long week of tests. We were selected online in twenty from around the world. Then the various phases took place during the week, with two solo rehearsals and the final with the orchestra on Sunday».

⌈ What was the chosen concert? ⌋

«The program was very interesting, a nice surprise for me to have been appreciated by the jury on various repertoire. I performed Chopin’s first concert for piano and orchestra».

⌈ What’s the weight of this contest? ⌋

«It is one of the most important in the UK. Competitors from all over the world have arrived. And for the winner, a prize pool of 10 thousand pounds is up for grabs».

«Well, a Pole, already on the jury at the Chopin in Warsaw, certainly gives more reasons. It was a great satisfaction to be awarded by Piotr Paleczny».

⌈ Will there be concerts? ⌋

«I imagine they will come, the jury has listened us. There were music operators from all over the world but mostly British. It will be interesting to open a path in the music world of the United Kingdom».

⌈ How is the situation of live music today compared to 2020? ⌋

«From 2021 I restarted, I won the Ricard Viñes prize in Lleida (Barcelona) in Catalonia. I still have solo concerts, starting the new year with a concert at the Sala Maffeiana where Mozart had played (I trust in his blessing!). The nice thing is that I play the same day he performed, on January 5th»

⌈ Then you will go back to Venice, in the Fenice? ⌋

«Yes, in February I will play with the orchestra of the Fenice and then I am on the bill in the season of Musikamera».

«I will be in Florence in February. I am happy to be able to resume a more regular activity live»,

«Yes, the are. When I was a kid, I won a lot of competitions and they were my gym. Today adult competitions are the way to measure my level and progress but they are also an international showcase».

⌈ Did you enjoy the musical energy of Manchester? ⌋

«Manchester is a city with many students, the competition was followed by young people, then it was held in the college of Manchester, one of the most coveted in the UK».