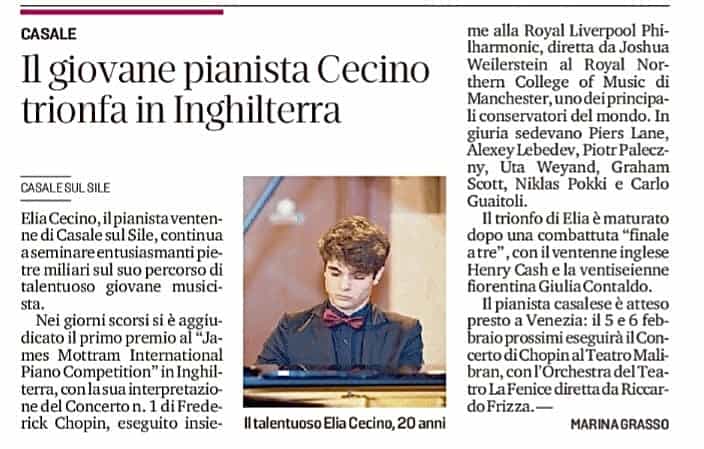 Elia Cecino, the twenty-year-old pianist from Casale sul Sile, continues to sow exciting milestones on his path as a talented young musician.

In recent days he won the first prize at the “James Mottram International Piano Competition” in England, with his interpretation of the Frederick Chopin’s Concerto No. 1, performed with the Royal Liverpool Philharmonic conducted by Joshua Weilerstein at the Royal Northern College of Music in Manchester, one of the world’s leading conservatories. The jury included Piers Lane, Alexey Lebedev, Piotr Paleczny, Uta Weyand, Graham Scott, Nicklaus Pokki and Carlo Guaitoli.

Cecino is expected soon in Venice: on February 5 and 6 2022 he will perform Chopin’s Concerto at the Malibran Theatre, with the Orchestra of the Teatro La Fenice conducted by Riccardo Frizza.