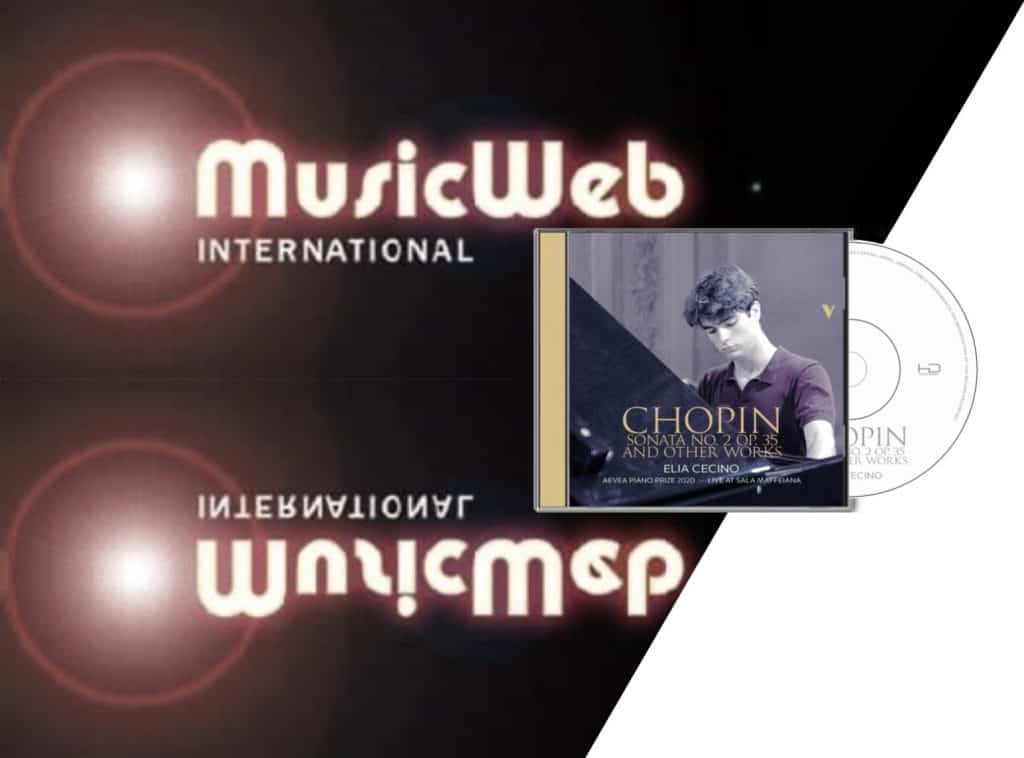 In October 2020 Suonare Records released Elia Cecino’s debut album which was dedicated to Beethoven, Chopin and Scriabin. For his second CD, this time produced by OnClassical, he focuses on the music of Frédéric Chopin. As a curtain raiser to his programme he’s chosen the early Introduction and Rondo in E flat major, Op. 16, penned during a beautiful summer the composer spent at Côteau, and published in the autumn of 1833 bearing the dedication: “dedié à son élève Mademoiselle Caroline Hartmann par…” I’m pleased that Cecino has included this, as it’s a work that’s been unjustly neglected. I only became acquainted with it three or four years ago in a performance by Vladimir Horowitz, filmed in his sitting room and available on Youtube. It’s well-worth watching. Cecino rises to the challenge admirably, delivering a reading exhibiting virtuosity and panache. He’s got an amazing colour range, and every bar is dramatically charged.

The pianist has an instinctive way with the Mazurkas, and instills into each elegance and tastefully-judged rubato. The Op. 24 set cover a wide range of emotions from joy and playfulness to sombre dolefulness. The open fifths in the left hand of No. 2 in C major evoke a rustic charm, whilst in No. 4 he fully captures the suave exotic rhythms. The two Op. 32 Nocturnes fare particularly well. They have all the ingredients one could wish for, nuanced voicing, rarefied expressiveness, striking lucidity of textures and achievement of colour. The ending of Op. 32 No.1 can be particularly difficult to bring off. Not here, though, where the sinister, threatening ending makes a striking contrast with the serenity and poise that has preceded it, played with dreamy affection. Cecino must have great affection for the Polonaise in F sharp minor, Op.44 as he also included it on his debut CD. I have to admit that it’s my favorite and preferable to the ubiquitous Op. 53. Menace, portent and drama sit either side of a mazurka, which provides not only contrast but, as one author put it: “a nostalgic recollection of old times and faraway places”.

Chopin’s Second Sonata begins bold and forthright and Cecino’s big style playing successfully conveys the music’s dramatic sweep, with the lyrical second subject eloquently contoured. There’s something demonic about the Scherzo, making the song-like trio section feel like balm to the senses. There’s no sentimentality in the Funeral March, and in the nightmarish finale, as Arthur Rubinstein said: “One hears the winds of night sweeping over churchyard graves, the dust blowing and the dust that remains”.

Though the recital has been recorded live, I detected no audience presence. Cecino has been blessed with a well-voiced, well-regulated and exceptionally beautifully sounding Steinway D, allied to an ideal responsive acoustic. He’s a natural Chopin player with a commanding style, who offers consistently fine, idiomatic and rewarding performances. I’m certain we’ll be hearing much more of this young pianist in years to come. In short, this release gets my enthusiastic thumbs up.